When theory and observation collide: Can non-ionizing radiation cause cancer? 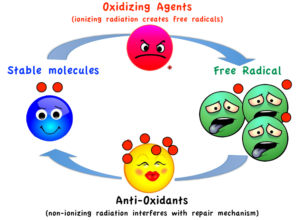 November 29, 2016:  The Missing Link:  Why your government isn’t protecting you from mobile phones and Wi-Fi when research shows this radiation causes cancer.

The American scientific journal, Environmental Pollution, reports in its next issue that government safety guidelines for microwave radiation emitted by mobile phones, Wi-Fi, smart meters, and other common wireless devices, are fundamentally flawed and fail to protect the public from this possible carcinogen.

This paper presents a highly probable mechanism that involves an increase in free-radicals, which–in turn–explains the increased risk of cancers documented in epidemiological studies that are associated with environmental exposure to RFR and ELF EMFs at levels well below international guidelines.

•  There is sufficient scientific evidence of cellular damage caused by non-ionizing radiation (NIR) well below thermal guidelines.
•  Applying the ionization model to NIR is inappropriate as mechanisms of biological interactions differ.
•  Free radicals can and do cause cancer and NIR can and does increase free-radicals.

For more information and to download the paper visit: